The heritage movement in this province has been around long enough now — we should have some good, thoughtful writing about what it is, where it came from and where it’s going.  But this seems in short supply. Or maybe it's just hard to find.

We have a few important articles about the history of the preservation movement in Ontario and the development of our heritage legislation.  I’m thinking especially of Mark Osbaldeston’s article, “The Origins of Heritage Preservation Law in Ontario”, published in 1995 in the The Law Society Gazette; and Victoria Angel’s 1998 thesis paper, “The Ontario Heritage Act and The Provincial Program: An Alternate Model for Heritage Conservation.”  Both of these should be read, or re-read, by anyone interested in the history of our heritage policy and legislation.

And there are a handful of government publications, all likewise old, but not necessarily dated.  Perhaps the most significant of these was released 25 years ago this spring: A Strategy for Conserving Ontario’s Heritage: The Report of the Ontario Heritage Policy Review.

I’m a bit biased, because I was part of the Ontario Heritage Policy Review team that worked on this report. (In fact, the review, which ran from 1987-1990, gave me my first real policy job.)

The report — known in-house as the “black baby book” because it had a black cover with a cherubic baby face in one corner — was the first government document to look at cultural heritage in Ontario in a big-picture way, providing a coherent policy framework for the conservation of our heritage, before getting down to the “strategy”, the details of who-does-what.

Like most government reports it had a limited shelf life, especially as the Liberal government of David Peterson, which produced it, was defeated later that year by Bob Rae’s New Democrats.

But there are a small number out there — including some who did not work on it! — who still remember this report and think highly of it.

Maybe a quote or two from the report would help give you a flavour:

Ontario’s heritage is that part of the collective heritage of all humanity for which we have particular responsibility….

[W]e are coming to see our heritage as the dynamic and ever-changing context within which we live our lives.  We add to it and subtract from it daily, continually interpreting and reinterpreting it in ways that deepen our understanding of ourselves and our world.  It is all around us and within every one of us. “A fish is the last to discover water’'; our heritage is the “water” in which we live. (p. 19)

Its heritage is a society’s network of touchstones.  Familiarity helps society cope with change.  Studies of stress suggest that individuals can cope with only a certain amount of change, even positive change, at any one time.  Beyond a particular threshold our mechanisms begin to break down.  Without networks of familiar touchstones — both tangible and intangible — communities, like individuals, suffer various breakdowns of social order and well-being. (p. 9)

Try to get your hands on a copy. 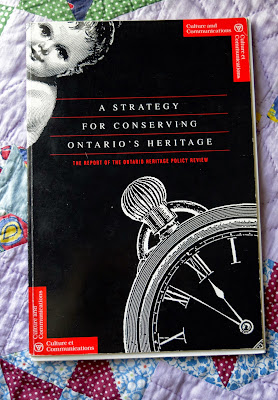 Posted by Dan Schneider at 3:49 PM