Back to the Rockwood Academy

I hadn’t been there for decades.  Yet, when greeting Andy Drenters at the door of the Rockwood Academy, I said: “This is one of my favourite places in the world.”  On a beautiful day in May it was delightful to see how little things had changed.

Rarely if ever in my life has there been a place like the Rockwood Academy that has brought together the personal and the professional.

The tale I have to tell begins in 1980, but the Rockwood Academy story goes back to the 1850s. 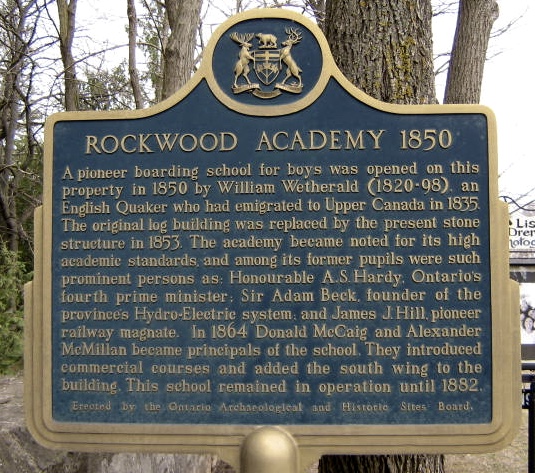 Fast forward to 1960 when the near derelict property was acquired by Josef (Yosef) Drenters, a sculptor of Belgian origin, who painstakingly began its restoration and renewal.

The Academy is immense, rambling and oozes atmosphere — a building that looks and feels very old and timeless, as much on the inside as out.  I guess you would say it has great spirit.  Much of that intangible something is owing to the two men most closely associated with, and devoted to, it — William Wetherald and Josef Drenters.  And there was an uncanny physical resemblance between them…


Josef, who had spent seven years in a seminary before leaving Europe with the rest of his family to come to Canada, was 29 when he bought the Academy property, seeking a home and studio. He devoted the following two decades not just to his sculpture but also increasingly to the building.  The Academy was more than a labour of love; it became an obsession that sometimes seemed to interfere with his art.  Or perhaps it is truer to say, as he did, that the Academy was his greatest and most demanding work.

Josef laboured for many years on the property with the help of family, especially his brother Andy (Andreas), and friends, including the landscape architect Murray Haigh, who was for a time his partner.  Then in 1978 he discovered… the Ontario Heritage Foundation, today’s Ontario Heritage Trust.  The Foundation provided a grant of $65,000 — those were the days! — to help with the stabilization of the walls of the old gymnasium (the rear wing of the building) and other structural work.

As a condition of the grant Josef signed a heritage easement agreement protecting in perpetuity the exterior and many interiors of the 25-room building, as well as other structures on the property including a small stone chapel Josef had built himself.   This easement was one of the first for the OHF since it had gained the power to acquire heritage easements with the passage of the Ontario Heritage Act a few years before.

Now get this — Josef was so conscientious and had such high standards for the work to be undertaken that he ended up doing much of it himself and making the unprecedented gesture of returning $11,000 of the grant.

Just about this time, in 1980, I come on the scene as the new staff member responsible for the OHF’s easements program.  Pretty quickly I got out to visit the enchanting Rockwood Academy and meet its intriguing owner.

From early on I recall Josef’s concern, with the building itself secured, for preserving Academy’s surroundings and landscape.  On the edge of the village and backing on to a farmer’s field, the property retained its original rural setting.  But little Rockwood was growing….  Josef had already been able to purchase a small parcel of land at the rear and to the south of the Academy, including the old Academy bank-barn (I suspect the OHF had put up some of the money for this).  He approached his neighbours with a proposal that they go in together to buy more of the field behind, but to no avail.

Alas, there were soon much bigger worries.  Some 12 years before Josef had had a bout with cancer and in 1983 the cancer returned.  Facing a terminal diagnosis he agonized over the future of his beloved Academy.  While the heritage easement offered some assurance should the property remain in private hands, Josef seems always to have felt that he was a kind of trustee for future generations and he had come to see the OHF as a committed partner in the Academy's preservation.  As for his family, Josef’s brother Andy, also a sculptor, had a close connection with the property too.

Josef decided he would leave the property to the Ontario Heritage Foundation subject to a life interest for Andy.

I had become a friend and Josef’s death in November 1983, at the age of 53, was a huge blow.  With my colleagues Larry Ryan and Herb Stovel I attended his funeral at the towering Church of Our Lady in Guelph.

In her book Heritage in Stone: Yosef Drenters and the Rockwood Academy, Barbara Smiley tells this story from Josef’s final days:

[Josef’s close friend] Murray Haigh lit a candle in the Academy chapel on All Saints’ Day and made a beautiful wreath of all the last autumnal plants and berries from the garden. This he placed in front of the alter where Josef had spent many hours. When Murray received the sad news that Yosef had died early in the morning of November 8, he went straight to the chapel. The candle, which still had plenty of wax left to burn, had gone out. A small flame extinguished but the symbol of a wonderful man with a great heart, full of compassion, talented, kind — yet a perfectionist and stern taskmaster who never settled for second best.

Josef’s intention of leaving the Rockwood Academy to the OHF was soon confirmed.  But what was not at all clear was whether the Foundation would accept it.

Posted by Dan Schneider at 2:48 PM