Back to the Rockwood Academy, continued

The fact you give something to someone, or die leaving it to them, doesn’t mean they have to take it.  Especially when it comes with strings.

Josef Drenters willed the Rockwood Academy to the Ontario Heritage Foundation (now the Ontario Heritage Trust), but with a life interest for his brother Andy Drenters.  That was one complicating factor in seeing Josef’s wishes fulfilled.  But the Foundation had accepted property with life interests before — this was the case with the property known as Inge-Va, now a historic house museum in Perth (although in that case the donor was alive and retained the life interest rather than devising it to a third party).

The real obstacle to the Foundation accepting the Academy was financial.

Property ownership is of course a big responsibility, doubly so if you are a public body with a mandate to own, preserve and maintain heritage buildings.  Since its creation in 1967 the OHF/OHT has learned from experience how demanding, in all respects, heritage properties can be and the risks of the (less discretionary) budget for capital work on its sites eating into and cramping the (more discretionary) budget for its other programs.  Over the years the Foundation became understandably wary of accepting heritage property from donors without an endowment or some dedicated funding source to help sustain the property long-term.

The experience with the Rockwood Academy probably contributed to the evolution (read: tightening up) of the Foundation’s acquisitions policies.  There were no monies in Josef’s estate to endow his gift of the Academy.  Quite the opposite… there were two mortgages!  (I don’t recall the amount involved — not huge, but not inconsiderable either.)

It was soon apparent that the Foundation would not accept an indebted Academy.  And so, in 1984, the Friends of the Rockwood Academy was born.

The core Friends group consisted of Andy Drenters, his wife Heather, Murray Haigh, and me.  We began raising money to pay off the outstanding mortgage debt.  We solicited donations and pledges from friends of Josef’s, people who owned his work and others who were concerned for his legacy and wanted to see the Academy preserved.  (I remember my colleague Herb Stovel making a generous multi-year pledge.)

I’m pretty sure we would not have reached our fundraising goals, at least in time — the Foundation’s Board was not going to wait forever.  But out of the blue came… Agnes of God.

A movie by Canadian director Norman Jewison, Agnes of God takes place in a Quebec convent where strange things are going on, including what may or may not be a miracle.  But for the Friends it certainly seemed like a miracle that Jewison wanted to shoot the film at the Rockwood Academy, over a several month period, and of course pay for the privilege. 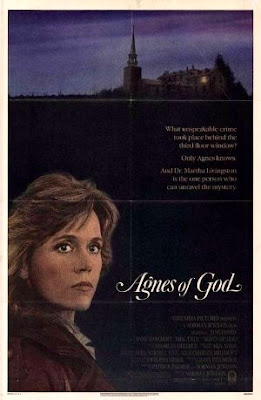 The Academy, with its imposing stone edifice and monastic ambience, was perfect for the part.  Some temporary alterations to the property were naturally required, to make it less "Anglo" and more "Franco", including the addition of faux dormers on the roof… and the construction of a mock bell tower at the rear!

Starring Jane Fonda, Anne Bancroft and Meg Tilley (yes, they were all there in Rockwood), Agnes of God was released in 1985.  Location fees combined with the funds raised by the Friends more than paid off the Academy’s mortgages.  The way had been cleared for the Ontario Heritage Foundation to accept the property.

Now for something completely different.  About this time the simmering threat we looked at last time — the encroachment on the rural setting of the Academy by housing development — seemed suddenly to ignite.  Distracted by Josef’s illness, death and the uncertain aftermath, the Friends and the Foundation had somehow failed to notice that the lands at the rear of the Academy, which had been zoned agricultural, had been acquired by a developer… and were now zoned residential… and a subdivision had been approved.  Yikes!

And here’s where the stop orders come in.

Development of the subdivision called for extensive clearing and grading of the field immediately behind the Academy, including the levelling of a large hill.  Frantic to secure a buffer zone including the hill, we turned to the Ontario Heritage Act.

Hidden away in Part VI of the Act (“Conservation of Resources of Archaeological Value”) was a power that had never been used.  Subsection 62 (1) said:

Where the Minister after consultation with the Foundation is of the opinion that property is of archaeological or historical significance and is likely to be altered, damaged, or destroyed by reason of commercial, industrial, agricultural, residential or other development, the Minister may issue a stop order directed to the person responsible for such commercial, industrial, agricultural, residential or other development prohibiting any work on the property for a period of no longer than 180 days, and within that period the Minister or any person authorized by the Minister in writing may examine the property and remove or salvage artifacts from the property.  (emphasis added; the provision is the same today, except that “Trust” has replaced “Foundation”)

Okay, some of you are thinking that this stop order power was intended for archaeological sites, not artifact-free hills behind built heritage sites.  And I’d agree.  This is a good example of how legislation can sometimes be interpreted and used (read: stretched) in ways beyond those intended — and therefore why interpretation based on “what the drafters intended” is not definitive.  But back to the story.

Because the hill property was an original part of the 1850s Academy farm — and because bulldozers had in fact begun to level it — then Minister of Culture and Recreation Lily Munro, consulting with the OHF, formed "the opinion" that the property was of historical significance and was likely to be damaged or destroyed.  In September 1985 she issued a 180-day stop order under section 62 affecting an approximately three acre parcel including the hill; after it ran out, she issued a second stop order in May 1986. [Note 1]

One reason why the section 62 power had not been used (and has never been used since) has to so with subsection 62 (2).  This requires payment of compensation for “personal or business damages resulting from the stop order.”  The amount of the compensation is reached by agreement; failing that, by a proceeding under the Expropriations Act.

In any case stop orders were obviously not a long-term solution to the buffer zone issue.  The Ontario Heritage Foundation in the end reached agreement with the subdivision owner for the purchase of one acre, including most of the hill, for $50,000.

Thirty years ago, in 1986, the OHF acquired the Rockwood Academy.  For more than 55 years it has been the home, studio and gallery of two remarkable brothers — Josef Drenters, who restored and enhanced it, and then Andy Drenters, who has been its faithful custodian.  The Academy is a magnificent place with a fascinating story… with many chapters left to come.

Note 1: Lily Munro, just a few months on the job after the swearing in of David Peterson’s minority Liberal government in June 1985, deserves great credit for taking this bold action. The only other use of a stop order under the OHA was by Culture Minister Aileen Carroll in 2009, who issued a 60-day order under section 35.2, which was added to Part IV of the OHA in 2005.  That order was issued at the request of the City of Toronto to stop demolition of the Maclean House near Casa Loma:
http://www.theglobeandmail.com/news/national/razing-of-maclean-home-stopped/article4296718/.