Automatic protection in the deep

Still with archaeology and how it is protected in Ontario, what about our marine heritage?

Let’s just dive in.  But try not to get in over our heads.  (Sorry, something about this topic makes puns tempting.  And here I’m with Oscar Wilde: the best way to get rid of temptation is to yield to it!)

Paragraph 3 was added in the sweeping changes to the Act in 2005.  What does it mean and why is it necessary?

Under paragraph 2 shipwrecks and other marine sites enjoy the same automatic protection as other, land-based archaeological sites. But paragraph 3 gives some sites — specific ones listed by regulation — an even greater degree of legal defence.

For these special sites, think of a huge column or tube centred on the site on the lake or river bed.  The tube is 1000 metres wide and extends from the bottom to the water's surface.  Within the tube you can’t dive or operate any kind of submersible vehicle; you also can’t use any kind of device capable of surveying or mapping the site — from below or on the water’s surface.

Getting to the bottom of things, the reason for this no-go, no-survey zone is that the basic prohibition against alteration or removing artifacts doesn’t go far enough.  Some marine archaeological sites are so fragile or sensitive that you just don’t want anybody or anything getting close — they can be disturbed even by divers or underwater vehicles moving near them, or they contain human remains and are effectively a burial place.

Of course, the particular activities are not forbidden hook line and sinker; but you will need a special licence to do them.

So what are these exclusive places?  Ten years ago, in 2006, the province approved a regulation listing three shipwreck sites: two War of 1812 American warships, the Hamilton and the Scourge, on the bottom of Lake Ontario east of Hamilton; and the American lake freighter Edmund Fitzgerald, in Lake Superior west of Sault Ste. Marie. [Note 1]

Remember that the 500 metre radius is the default; the Act says that the protection zone may instead be “within any other distance of the site as may be prescribed by regulation.”  The 2006 regulation prescribes a larger 750 metre radius for the Hamilton and Scourge.

By the bye, you may wonder about the Eddie Fitz.  Two hundred-year-old warships are one thing, but a rusty iron ore carrier that sank in 1975?  As with the Hamilton and Scourge, the Edmund Fitzgerald is also a final resting place for the seamen (29 in all) who perished with her.  But the cultural heritage significance of the site is largely owing to the iconic Gordon Lightfoot song, “The Wreck of the Edmund Fitzgerald”, released 40 years ago this summer.  Like the Toronto tree that gave rise to “The Maple Leaf Forever”, it’s a great example of the unexceptional acquiring heritage value through the art it inspires. (Okay, “art” may be a stretch for TMLF.)

Getting back on course, there is a bit of a ripple in the “dome” protecting the Edmund Fitzgerald.  Actually more than a ripple — a whole chunk of the dome is lopped off.  It so happens that the Eddie Fitz wreck lies very close to the international boundary running through Lake Superior — in fact, the U.S. border is less than 500 metres away.  So as not to infringe on the sovereign territory of our neighbour, the regulation says: “If an area that falls within [the 500 metre] radius … is outside Ontario, paragraph 3 of subsection 48 (1) of the Act does not apply to that area.”

Of course the OHA would not have application in the United States or anywhere beyond Ontario’s borders, but it’s a nice diplomatic touch to have the regulation acknowledge that.  You could say it deftly synchs the Eddie Fitz (with)in the jurisdictions concerned (sorry, going overboard!).

Why do only three sites get this favoured treatment?

Understandably the large recreational diving community was less than enthusiastic about the prospect of new, quite restrictive limitations on access to shipwrecks and other marine heritage sites.  There were also concerns that publicizing the location of lesser-known marine resources might attract the wrong kind of attention, doing more harm than good.  These few famous “watery grave” sites seemed a good place to start.

But after a decade of experience the provincial culture ministry should be reviewing the situation.  And deciding that a much longer list of important sites deserves this premium form of protection too. 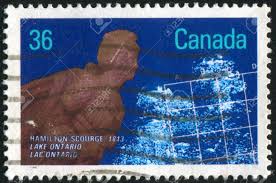 Note 1: See Ontario Regulation 11/06 under the OHA. For obvious reasons the regulation pinpoints the location of the sites. For example, the Hamilton and Scourge site "is comprised of the water and land under water in Lake Ontario at the point of intersection of the meridian of longitude 79°18.57' west with the parallel of latitude 43°18.43' north." This means that for legal purposes the sites are effectively vertical "lines" rather than "points", extending from the lake bed to the lake surface.
Posted by Dan Schneider at 10:26 AM