What's wrong in Rondeau? Part one: The park and its cottages


And summer’s lease hath all too short a date
~ William Shakespeare, Sonnet 18

It’s high summer and those of us who aren’t would probably like to be at a cottage.

This cottage is in Rondeau Provincial Park, on Lake Erie south-east of Chatham, Ontario.  Rondeau is a big sand spit jutting into the lake creating a circular — ronde eau — bay (actually more egg-shaped). 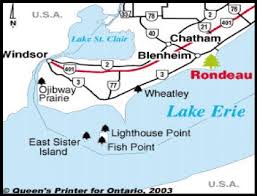 Established by statute in 1894, Rondeau is the second-oldest provincial park in the Ontario, just after Algonquin in 1893. (Note 1)  The Rondeau Provincial Park Act set apart over 8,000 acres of the Rondeau peninsula as a “Public Park Forest Reservation and Health Resort for the benefit, advantage and enjoyment of the people of Ontario.”

Supporting the “health resort” objectives of the park, the legislation includes specific provisions relating to “the lease...of such parcels of land in the park as may be deemed advisable for the construction of buildings for habitation during the summer, and such other buildings as may be necessary for the accommodation of visitors or persons resorting to the park as a sanitarium for health or summer resort.”

From the start cottages were a key component — they provided seasonal accommodation for families and their leases created income to help make the park self-sufficient.  The first cottages at Rondeau date from the 1890s and they continued to be built through the first half of the twentieth century with the number of cottages peaking at about 450 in the 1950s.

About that time the attitude towards cottages of the owner of the park — the Department of Lands and Forests, now the Ministry of Natural Resources and Forestry (MNRF) — started undergoing a change.  Cottages built and owned privately on leased lots came to be seen as incompatible with the long-term goals of the park to preserve the natural environment and provide for public recreational use. (It’s worth noting that the cottage lots comprise only about one percent of the park and that all waterfront and beaches are public.)

The province stopped approving new cottages and over time, as cottages came up for sale, began buying them… and demolishing them.  From 451 the number of cottages has fallen to 283 (and counting — down).

Cottage lot leases, customarily for 21 years and renewable, were last renewed in 1996, without the renewable clause.  All of the remaining leases are due to expire in less than a year and a half… on December 31, 2017.

Needless to say, the cottagers, many of whose families have been at Rondeau for generations, are not happy with the situation.  The Rondeau Cottagers Association (RCA) strenuously opposes the removal of cottages and the potential end of the 125 year-old cottage community at Rondeau.

With the fast-approaching termination of the leases the long-simmering cottage issue is clearly coming to a head. (Note 2)

Not coincidentally, something else is expiring — has expired in fact.  The park’s current management plan was adopted in 1991 and aimed to guide the management and operation of Rondeau for 20 years. (Note 3)

While the plan acknowledges the importance of cultural and historic resources in the park, they are clearly of secondary interest.  For example, although a key provincial parks objective is “to protect provincially significant elements of the natural and cultural landscape of Ontario”, under this heading the plan discusses only natural features of the park.

The plan does say: “A cultural heritage resources management strategy will be prepared to guide exploration, preservation and utilization of Rondeau’s cultural resources.”  But after 25 years there is no evidence this strategy has ever been done.  And no indication the now outdated plan is being revised.

There is little doubt the cottages issue is holding things up. 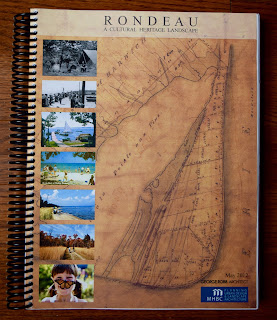 Enter the RCA, which in 2011, on its own initiative, commissioned a cultural heritage study of Rondeau.  The consultants 2012 report, Rondeau — A Cultural Heritage Landscape, makes a strong case that the park is a cultural heritage landscape of not just local but provincial significance. (Note 4)

A couple years go by.  Then things really get interesting.  The municipality, Chatham-Kent, steps in and in early 2015 puts Rondeau Provincial Park on its municipal heritage register. (Will it surprise you that a good many of the cottagers are from Chatham?)

Not content with listing the park under the OHA, C-K proceeds to study the park for potential designation as a heritage conservation district under Part V of the Act. (Note 5)  That moves forward to the preparation of an HCD plan.  Then, in October of last year, the municipality — in a move both admirable and audacious — designates the built-up area of the park as an HCD.

Well, you know what that would do… demolition or removal of cottages, not so fast!

To all this — including public meetings on the proposed HCD — the park’s owner, MNRF, could not have been oblivious; but it seems the passage of the designation by-law was what finally prompted a response.  They appealed… and last month the Ontario Municipal Board came to Chatham.

What happened?  Tune in next time for “What’s wrong in Rondeau? (part two).”

Note 1: In case you’re wondering, Ontario now has 329 provincial parks and, dating from 1994, 292 conservation reserves. The Ministry of Natural Resources and Forests distinguishes these two types of protected area as follows:

Provincial parks
Protect significant natural and cultural features in the province while supporting Ontario’s economy. Regulated under the Provincial Parks and Conservation Reserves Act, they are important for outdoor recreation, scientific research and environmental monitoring, and education.

Note 2:  The situation at Rondeau has some parallels with that of Toronto Island. There the decades-long wrangling over the future of the island cottage community was only finally settled with the passage of special legislation, the Toronto Islands Residential Community Stewardship Act, 1993. There's also been an issue with cottages in Algonquin Park, but there the cottages are scattered throughout the park, while at the much smaller Rondeau they form a village-like community.

Note 4: The consultants, George Robb Architect and MHBC, “concluded that the cottages at Rondeau are an important part of the formative cottaging history in the Province. Together with the cultural heritage and natural landscape setting, the collection of built heritage resources represents a major contribution to the local regional economy and identity.”