[M]ost of those who have grown to know and love our country's history have travelled that path guided by heritage buildings that were the gateways to the stories of the past.
~ Peter Van Loan, MP (CPC)

The most interesting heritage discussion in Canada right now is going on in Ottawa — in the House of Commons!

This week MPs engaged in a second hour of Second Reading debate on Bill C-323, a private member’s bill that would provide income tax incentives for the rehabilitation of historic places.  The March 9 debate followed a first hour of debate on February 10. [1]

The bill was introduced in Parliament late last year by Peter Van Loan, MP for the Ontario riding of York—Simcoe and Official Opposition Critic for Canadian Heritage and National Historic Sites.  For background on the bill see my OHA+M post from December 21, 2016.

Leaving aside for the moment consideration of the bill itself, it is wonderful to see our representatives, from all three major parties, engaged in a passionate discussion of the importance of our cultural heritage.

These [historic] buildings tell a story about who we are and where we came from. They impart important lessons from the past and remind us about the challenges we have overcome and the accomplishments we have had in this country. In short, they highlight and bring to life those special moments in our history that are worth remembering.
~ Mark Gerretsen, MP (Lib.)

As a private member’s initiative, the bill faces an uphill climb.  As a measure amending the Income Tax Act and affecting government revenues, that climb is especially steep.

At Second Reading a bill is discussed at a high level, with MPs weighing in on whether the concept or principle of the legislation should be supported.  More rigorous scrutiny of the details of the bill comes — if it comes at all — later, when the bill moves on to the committee stage.

So how's it going so far?

Considering that the fate of the bill is in the hands of the Liberal government, one would have to say… there is still reason to hope.

In the first hour of debate last month two Conservatives, three Liberals and three NDP members took part.  Not surprisingly, the two Conservatives, including Mr. Van Loan himself, spoke in favour of the bill.  The NDPers were clear that while they had some concerns they supported the bill in principle, in part because of its “greeness.”

New Democrats have long supported Canadian heritage and we support the goal of this private member's bill of preserving historic stock. … This legislation would help to clear the path for the creation of good green jobs; jobs that are stable, safe, and family-supporting; jobs that do not endanger the climate or the environment; and jobs that help us in the gradual transition away from reliance on fossil fuels.
~ Sheila Malcolmson, MP (NDP)

As for the Liberal MPs who spoke, one said he was “definitely sympathetic” to the bill and asked some good questions.  But the other two — one of whom was the Parliamentary Secretary to the Minister of Finance — were much more guarded.  While not saying the legislation was a bad idea, they made the point that “tax changes should ideally be made as part of the budgetary process”, since obviously a new tax credit is going to cost something in terms of foregone revenue. [3] They also mentioned the government’s 2016 commitment to undertake a “comprehensive review of tax expenditures”, part of a broader exercise to “eliminate poorly targeted and inefficient programs, wasteful spending and ineffective or obsolete government initiatives.”

Both these points seem to suggest that, in the eyes of the government, the timing of the bill is not great.

Rather than simply dismiss the bill on that basis, the Liberal critique — and this could actually be construed as a more positive sign — went on to identify several substantive issues (some more coherent than others):

One might observe that less-than-ideal timing of a bill should not be a fatal flaw.  Nor should specific policy and administrative criticisms and concerns, if they can be countered, fixed through amendments or addressed through implementation planning.

Across the country, Canada's built heritage reminds us of where we came from and where we have been along the way. From the smallest rural towns to our grandest cities, the history contained within these buildings forms what it means to call our communities home.
~ John Aldag, MP (Lib.)

Remarkably, a month later during the continuation of Second Reading debate on March 9, all MPs spoke forcefully in support of the bill.

Speakers comprised three Conservatives, including Mr. Van Loan, two Liberals and one NDP member.  The Liberal members did not raise any of the issues mentioned previously.  Mr. Van Loan, who spoke last, took the opportunity to thank “all those who have spoken in support of this from all sides of the house”, adding:

It is indeed, as those addresses indicate, a non-partisan bill. This is not a partisan effort. It is very much a product of the work of previous governments, both Liberal and Conservative, under which the foundations of this tax credit have been developed in this proposal, and it is a benefit to all of Canada. That is why all of us are indeed advocating for it.

He then went on to address some of the criticisms voiced on February 10.  He punctured the inequality argument, saying that what was unfair was that private owners of designated properties were effectively providing a public benefit with little/no help.  With respect to the need for the measure, he pointed out that existing tax rules may benefit donations to preservation charities but not the preservation efforts of private businesses and individuals.

Finally, in response to the cost concerns, Mr. Van Loan said that the costs were calculable and would be “very modest.” [3]

What’s next?  Second Reading debate is concluded and the vote is scheduled for March 22.  If the bill isn’t killed, it’s on to committee!

I was happy to see my MP, John Nater, the Conservative representative for the riding of Perth—Wellington, participate in the March 9 debate.  His remarks included a personal story:

There are many beautiful older buildings in my riding…. In fact, my Wellington county constituency office is in one such heritage building. It is a beautiful old post office. It was the Harriston town post office for many years. … Shortly after I was elected, I was able to take a tour of the building and to see the state of repair it was in at the time. Thanks to a hard-working local family, it took ownership of the old post office and restored it to an exceptionally high level of standard. Now my constituency office in Wellington county is located in that building. It has been renamed the “Old Post” and is now home to a number of different local businesses and community groups. I am proud to have played a small role in the restoration of that building.

It was no surprise that Mr. Nater is backing Bill C-323.  He had assured me as much in his reply to my letter urging his support.

Have you written to your MP?  If not, this is the time! 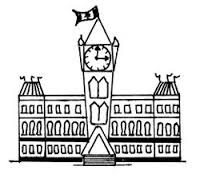 Note 2: Part of the case for the tax credits is that, while they reduce income tax for the taxpayer in the year of filing, over time there is a more-than-offsetting increase in tax revenue as a result of the returns on investment they stimulate. This argument is sounder in the case of a commercial, income-producing rehabilitation project than for a home restoration.

Note 3: Less clearly, Mr. Van Loan suggested that the government would have some control over the number of properties eligible for a tax credit since only properties on the Canadian Register of Historic Places qualify. In fact, under his bill properties designated under the Ontario Heritage Act and similar legislation could also be eligible.
Posted by Dan Schneider at 11:51 AM