The legislation we’ve been following, private member’s Bill C-323, is headed to committee!  But it’s uncertain when that will be.  The Environment committee is still busy with a major review of the Canadian Environmental Protection Act.  The committee is off the last two weeks of April and only has five weeks in May and early June before rising for summer break.

So it may not happen until fall.  In the meantime, we in the heritage community should be thinking hard about what to say to the committee — and who should say it — when they hold public hearings on the bill.

There is no question that the principle of the bill deserves strong support.  The principle being ... that the income tax system should be used to provide incentives for the rehabilitation of heritage property.

That doesn’t mean everything in this particular legislative proposal is fine and dandy.  A too-uncritical stance may not be the best course — either policy-wise or politically.  Now is the time to closely scrutinize the bill’s details. 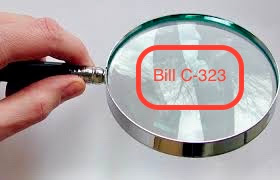 One person doing just that is Paul King, a past president of Community Heritage Ontario/Patrimoine Communitaire de l’Ontario and a member of the CHO/PCO board.  Until recently Paul was a partner in the law firm Fasken Martineau.

In the current issue of CHOnews, Paul talks about what is in the bill (and what is not). [1] He cites and comments on the issues raised during the Second Reading debate by government MPs, particularly Ginette Petitpas Taylor, Parliamentary Secretary to the Minister of Finance.

What concerns do Liberal MPs have about this bill? On February 10, 2017, in the House of Commons, they argued that:

Concluding that "some of these concerns have merit and deserve attention" at committee and that "[others] are dubious," Paul goes on to raise a number of other questions about the bill.

What other concerns about this Bill need to be reviewed by the House Standing Committee on Environment and Sustainable Development?

To these questions and concerns, which I share, here is one more.

The rationale for the legislations relies heavily on U.S. and Canadian precedents.  The U.S. model is the Historic Tax Credit, which is only available for properties that will be used for a business or other income-producing purpose.  In Canada, the Commercial Heritage Properties Incentive Fund (CHPIF) pilot had a comparable focus. [2]

This bill goes way beyond these models by making the 20 per cent tax credit available to residential properties as well.  In doing so, it obviously has broader appeal.  But it could undercut one of the strongest arguments for this, or any, tax change — that the program would generate more money for the federal treasury than it costs. [3]

It also greatly increases the number of potentially eligible properties, not necessarily a good thing in the eyes of a government clearly concerned about how wide a net is being cast and the implications in terms of costs and administrative burden.

Don’t get me wrong.  I am the first to agree that we need better, broad-based incentives for the preservation of designated properties.  But by making this bill a vehicle for achieving that, do we risk losing the whole shebang?

What do you think about the finer points of the bill?  Have a closer look here.

Note 3: This is because, as the American experience proves, the return over time on the investment the tax credits stimulate result in increased (taxable!) business income.
Posted by Dan Schneider at 5:47 PM