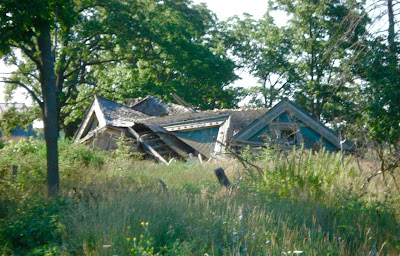 We’re ruminating on ruins, exploring the meaning and value of Ontario’s ruined structures.

Part of ruins' appeal is their perversity.  The very existence of a ruin seems to defy the norms of a society where land is real estate, its value determined by the real estate market.  Not functional or useful through this lens, a ruin has no worth.  What “value” it has is basically aesthetic and historical.

In the common lexicon:

As we well know, without active use an old building can go downhill fast and the normal outcome is demolition and replacement, skipping the ruin stage entirely.

But now and then a building reaches the point of no return, and is just allowed to keep going — through a long falling-down process into ruination and, unless there is some form of intervention, ultimate dissolution and disappearance. [1]

The most common example in our landscape is farm buildings.

Old, unused barns start to lose their siding; then more and more pieces fall away.  The timber structure with its massive beams can survive for decades before complete collapse.  Eventually what remains are stone walls, foundations, often a cement silo.

Farmhouses are sometimes left to rot away too.


And what’s left of old stone walls and rail fences — these too are remnants and reminders of our farming past. [2]


Instead of a protracted mouldering-away, the ruinous state can come suddenly, the result of a precipitating event like a fire or other calamity that destroys the building.  Old mills especially were notoriously subject to fires.  Economic conditions and changing technology sometimes meant it was not feasible to rebuild a mill following a conflagration, and if no other use for the property presented itself ….

Fire was also the culprit in the creation of what is perhaps Ontario’s most spectacular ruin — the hulking shell of St. Raphael’s Roman Catholic Church northeast of Cornwall.

Unlike many of the ruins we’ve looked at, the “open air museum” that is St. Raphael’s today is the result of major intervention.  After the church, built in 1821, burned 150 years later in 1970, the Ontario Heritage Foundation (now Ontario Heritage Trust) was responsible for the stabilization and restoration of the surviving stone walls and the landscaping of the site.  The magnificent National Historic Site is protected by one of the first OHF heritage easements. [3]

Note 1: The frequent use of the word “fall’ in describing ruins reminds us that there is something about a ruin which implies a losing battle with the force of gravity. In fact, “ruin” is derived from the Latin verb ruere, to fall.

Note 2: Fences figure in another part of Al Purdy’s poem, “The Country North of Belleville”:

Posted by Dan Schneider at 5:11 PM