Wish list changes to the OHA, #2 … or, two-way demolition appeals? 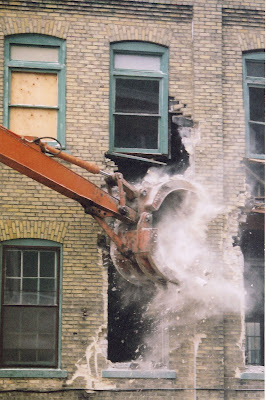 Or, in the case of the Gore Park buildings in Hamilton, are about to.  This because Hamilton city council earlier this year approved the demolition of these designated buildings … and despite an unprecedented on-line petition signed by over 1200 people asking them not to (and calling on culture minister Eleanor McMahon to intervene). [1]

What if even one of those people had appealed the council’s decision under the Ontario Heritage Act?  Of course, no such appeal right exists.

Could it?  We’ve been looking at possible changes to the OHA — and this is one of the biggies!

There is a strong argument that third parties — members of the public — should be able to appeal the decision of council to approve a demolition.

Since the overhaul of the OHA in 2006, the owner of designated property has had the right to appeal the municipality’s refusal to grant approval for demolition to the Ontario Municipal Board.  Previously there was no appeal … because council did not have the power to say no to demolition requests.  (Technically, it did, but a refusal only delayed the owner’s right to demolish for 180 days.)

With the strengthening of demolition controls — “no means no” — naturally came the question of appeal rights.  And to which provincial tribunal.  The Ontario Municipal Board and the Conservation Review Board were already in the OHA in other ways.  For a number of reasons it was decided to go with the OMB on demolition appeals. [2]

But as for extending the right of appeal to third parties aggrieved by the municipal decision to give the green light to demolition, it was felt this had not been adequately explored and discussed with stakeholders.  There was a sense that it might upset the development industry whose support for the legislation (tepid at best) was important for securing its passage.  Put another way, the provincial government in 2005 was attempting to juggle a number of competing interests and new public rights of appeal seemed a stretch too far.

In 2017 this deserves another look.

The starting point when analyzing policy changes of this sort is to see how comparable or analogous situations, if any, are handled in the same statute.

Let’s begin with the process for alterations to a designated building.  How does the OHA treat appeals in this case?  Here we get into the difference between a review and a binding appeal.

So while the appeal body and the nature of the appeal (review versus binding appeal) differ, we can say that the relatively new process for demolition appeals is much like the longstanding process for alteration appeals.  No third party involvement.

But what if the demolition approval and appeal process is really more akin to another process in the OHA — de-designation.

For something that (fortunately) does not get invoked much, the Act actually has two procedures.  If you are a municipal council wanting to repeal your designation by-law, section 31 applies.  But if you are an owner wanting to have the designation removed from your property, you can use the application process in section 32.  In either case the usual purpose of de-designating a property is to pave the way for demolition.

Until 2005 the two de-designation sections worked differently.  If the initiative to remove the designation was council’s (section 31), things proceeded very much like the standard designation process in section 29.  Council would have to consult with its municipal heritage committee, where there was one, and give notice to the owner and to the public (and to the Ontario Heritage Trust).  The owner or any person could object to the designation removal, resulting in a referral of the matter to the CRB.

However, if the owner initiated the removal of the designation (section 32), there was no public notice requirement and the “appeal” process was much like the alteration approval process we looked at above.  If the municipality said no, the owner could have the matter referred to the CRB for a hearing, etc.  But if the municipality agreed to remove the designation, nobody else could object.

It was all a bit confusing.  For years certain culture ministry staff would respond to local questions about de-designation procedure, where it looked like the designation (and the building) might be at risk, by deliberately steering people toward the section 31 process.  Why?  Because unlike the section 32 process it had the virtue of giving members of the community the opportunity to object to the designation repeal and to make arguments for keeping the designation in an open hearing in the full public spotlight.  (And in the rare de-designation cases that came before it, the CRB almost always recommended against repeal, which had a big persuasive effect on the council.)

This “loophole” was closed with the 2005 changes to the OHA.  Now if the owner applies under section 32 to remove the designation, and the municipality refuses, the owner can still refer the matter to the CRB — but if the municipality okays the application to de-designate, public notice must now be given and anyone can have the issue referred for a hearing. 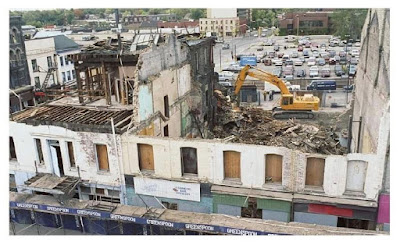 So how does this help us with our question about public appeal rights from demolition approvals?

Well, if demolition is more like de-designation than alteration, with comparable public and private interests at play, one could argue it should be treated in a similar way.  Meaning that there should be a public right to object to a decision to approve the demolition of a designated structure.

Support for this argument is found in another section of the Act.  Subsection 34.3 (1) says:

The council of a municipality shall pass a by-law to repeal a by-law or the part thereof designating a property under section 29 if the owner of the property has applied in writing to the council for consent to the demolition or removal of a building or structure on the property and,
(a) the council consents to the application …; or
(b) the Board has ordered that the municipality give its consent ….

This provision essentially mandates de-designation, in whole or in part, where the municipality consents to demolition.  In other words, if you can get approval to demolish the heritage building on the property that was the reason for the designation in the first place, the designation has to be repealed.

If demolition effectively means de-designation, and the de-designation process entails a public right to object, then shouldn’t …?

Note 1: For the sorry story of the Gore Park buildings see OHA+M from January 9, 2017: “For Hamilton’s Gore it’s crunch time!” The petition can be found here:
https://www.change.org/p/eleanor-mcmahon-intervene-to-halt-demolition-of-heritage-buildings-on-gore-park-hamilton

Note 2: There's more on this in OHA+M from February 8, 2017: “Alteration, demolition — and partial demolition?” (about nine paragraphs down)
Posted by Dan Schneider at 9:31 AM