A recent decision by the Conservation Review Board helps elucidate one of the criteria for heritage designation.

In Lambeth Health Organization Inc. v. London (City), issued on March 1, 2017, the Board had to decide whether a 1925 former school building in the community of Lambeth, now part of the City of London, met the criteria for designation in O. Reg. 9/06. [1]

The city, which wanted to designate the property, where the school is at threat of demolition, claimed that it met all three of the prescribed criteria — the building had design or physical value, historical or associative value and contextual value.  It looked like a strong case, since a property need meet only one of the criteria to be eligible for designation. [2]

But, following a two-day hearing this January, the CRB found the property didn’t meet any of the criteria and recommended against its designation.

The 24 page decision, by vice-chairs Su Murdoch and Robert V. Wright, reveals, yet again, the Board’s mastery of the significance criteria and sheds further light on their meaning.

The Conservation Review Board, don’t forget, has had ten years’ practice in using the now-ubiquitous criteria.  The first cases where the Board explicitly applied the 9/06 requirements in its decisions go back to the fall of 2007. [3]  Over the years the Board has become the de facto authority in the interpretation of the (inevitably) vague and (maybe) over-broad criteria, at least in the municipal designation context.

For those making the argument for designation and drafting notices of intention to designate, the case in London points out once again the importance of clearly and compellingly tying the stated reasons for designation to the wording of the criteria.

The part of the decision I found most revealing concerned the Board’s response to the city’s position that the school had heritage value because of its association with a prominent London architect.

2. The property has historical value or associative value because it,
…
iii. demonstrates or reflects the work or ideas of an architect, artist, builder, designer or theorist who is significant to a community.

Say you’re wanting to designate an old building or structure and you know its architect. How then do you make the argument that this criterion is satisfied?

Looking at many (most?) designation by-laws that reference connection to an architect, it seems enough to establish that a) so-and-so architect was active in the community for a certain period and was responsible for a number of works, including such-and-such, and b) this particular building or structure is one of them. Bingo, criterion met. 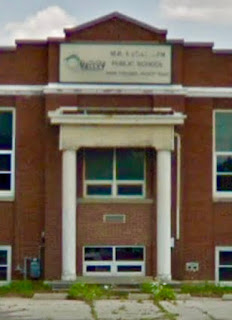 This essentially is what London did here. Not so fast, said the Board.

It is established by the evidence … that the 1925 portion of the school building is the work of London architect H.C. McBride. Given his roster of local works, it is reasonable to assume that he was “significant to the community” of London. On its own, the statement that this is “part of the representative work of McBride” lacks an indication of how this example “demonstrates or reflects the work or ideas of” this architect, as prescribed by O. Reg. 9/06. For example, does it demonstrate any design preference, motifs, peculiarities, or techniques for which McBride was known, or is it an example of a departure from his typical repertoire, etc.? Without this context, the building has the status of being simply another project by an architect attributed with over a hundred works. [4]

In other words it’s not enough to say that your (significant) architect built it — or, to dress things up slightly, that it’s “representative” of their work.

As the Board states, what does “representative” mean in the absence of context?  Look at the use of the word in the criterion for design or physical value:

The property has design value or physical value because it,
i. is a rare, unique, representative or early example of a style, type, expression, material or construction method, …

So if you’re talking, say, about a building being a “representative” example of the Gothic Revival style, you have a context or frame of reference, because that style is defined and understood as one having a number of characteristics, like pointy arches.

In London the work of architect McBride most likely involved particular design characteristics or techniques, but these were not spelled out, nor how the school in Lambeth “demonstrates or reflects” them.

Pardon the pun but the city’s case did not make the grade. [5]

A cautionary tale.  The city has not yet decided whether to proceed with designating the Lambeth school.

Update: On September 19, 2017 the City of London decided to go ahead with the designation of the school. See http://www.lfpress.com/2017/09/19/mb-mceachren-school-old-school-makes-grade-despite-objections.

By the way, Su Murdoch, who as a long-time CRB stalwart has had a pivotal role in the evolving understanding of the significance criteria, retired from the Board in May.  This was her last decision.

Note 3: Following the passage of the criteria regulation in February 2006 it took a while for the first designation cases to go to a hearing and the Board to issue a report. Among them were decisions concerning the Moody-Trachsler House (174 King Street East) in Mississauga and the Banting Homestead in New Tecumseh (Alliston). Of course the CRB from the very start in 1975 was engaged in evaluating properties, mostly using similar if non-mandatory criteria.

Note 4: Paragraph 57 of the decision.

Note 5: The Board also had some interesting things to say about contextual value and why it was not persuaded that the school was a landmark. At paragraphs 58-60:

In the Review Board’s experience of considering evidence within the criteria for Contextual Value, the definition of “landmark” has been much debated. In Qureshi v. Mississauga (City), 2015 CanLII 99223 at para. 88, the Review Board interpreted the term “landmark” “to mean a landmark in the context of its community.”

In this hearing, the City’s evidence was that the existence of a c.1925 photograph of the Lambeth Continuation School, reproduced in 2010, was sufficient proof of the landmark status of the property. The Review Board does not accept that a commercial postcard alone allows this finding.

Mr. Christensen [a participant in the hearing] speaking on his own behalf, and on behalf of the area residents who signed the petition opposing designation and supporting demolition, does not consider this school to be a landmark. Given that O. Reg. 9/06 is applicable to a property being evaluated as a candidate for municipal level designation, public sentiment within a community about whether a building on a property is a “landmark” should be given some weight.
Posted by Dan Schneider at 10:58 AM